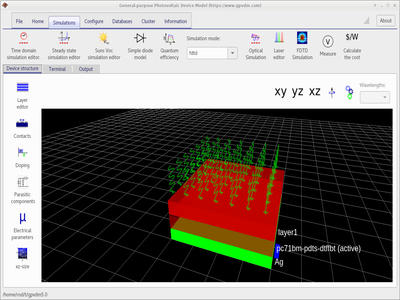 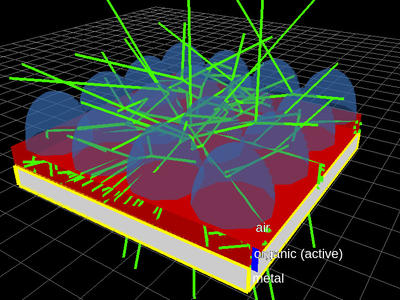 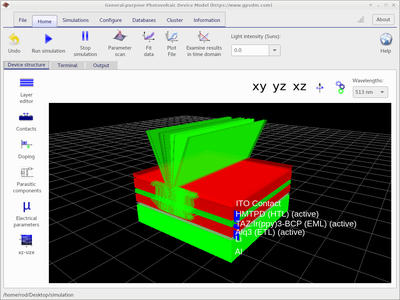 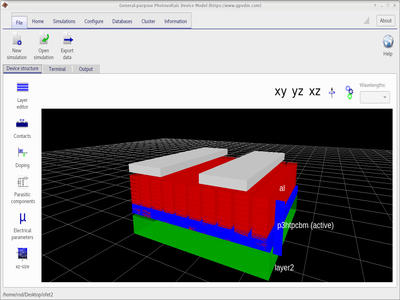 Use the power of device simulation to understand your experimental data from thin film devices such as Organic Solar cells, OFET, OLEDs, Perovskite solar cells, and many more.

Unlike may other models gpvdm is purpose built from the ground up for simulating thin film devices made from disordered materials. Specifically, gpvdm does not assume all carriers are in equilibrium and instead describes trapped carriers using a non-equilibrium Shockley-Read-Hall formalism, this enables disordered materials to be accurately modeled in steady state, time and frequency domain. A detailed description of the physical model can be found here. The model has had over 25,000 downloads to-date with over 130 publications having used the model. Gpvdm can simulate:


The model can simulate many transient and steady state opto-electronic measurements including:

The model makes it easy to study the influence of material parameters such as mobility, energetic disorder, doping and recombination on device performance. All internal device parameters are easily accessible through the graphical interface .

The model solves the device equations in steady state or time domain, in 1D or in 2D. Specifically, the model solves both electron and hole drift-diffusion, and carrier continuity equations in position space to describe the movement of charge within the device. The model also solves Poisson's equation to calculate the internal electrostatic potential. Recombination and carrier trapping are described within the model using a Shockley-Read-Hall (SRH) formalism, the distribution of trap sates can be arbitrarily defined. A fuller description of the model can be found in the here, in the associated publications and in the documentation. A historical source code archive can be found here. Physical models available are: